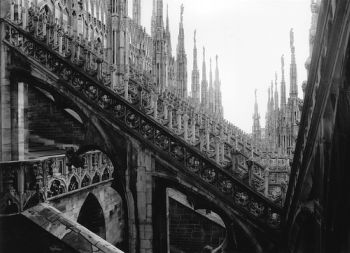 I’ve just returned from a three-week trip to Italy, two weeks of which was spent exploring places I’d either never been or hadn’t spent much time in. Despite predominantly rainy weather, I loved walking around the cobbled streets of historic Palermo and watching the sun set on the Amalfi hills. I ate more than my fair share of pizza in Naples, and restocked my perfume supply at Carthusia on the island of Capri.

And yet it’s my week in Milan that I’m thinking about most now that I’m home.

In a brief exchange on Twitter today, when someone asked about my favorite places in Italy, I found myself defending my choice of Milan. I routinely tell tourists to skip Lombardy’s capital when they visit Italy – especially on short trips – because it’s not as attraction-laden as cities like Florence, Rome, or Venice. But it’s a city I love, admittedly for personal reasons.

I’ve got more friends now in Milan than anywhere else in Italy, partly because I’ve spent more time there than anywhere else, so returning to Milan always feels a bit like coming home. I know my way around the city so well now that the excellent Milan public transport is comfortable and easy. There isn’t a long list of cheap Milan hotels to choose from, since it’s very much a business travel city, but more often than not I rent apartments in Milan which is quite an affordable accommodation option. I find Milan extremely navigable, rather than being sprawled out like Rome or too limiting like Venice can feel.

I tell travelers to skip Milan most of the time because on a two-week trip it doesn’t typically warrant more than a day – and that’s only if you’ve found the cheapest flights to Italy in and out of Malpensa Airport – so it may seem disingenuous of me to list Milan among my favorite Italian cities at the same time. But there’s a very good reason for it.

When I’m asked about my favorite places in Italy, I’m not thinking about them from the perspective of a visitor – I’m thinking about them from the perspective of someone who wants to live there. I’m asked “where are your favorite places in Italy” and I almost always hear “where do you want to live in Italy” instead. My answers, then, have more to do with places where I feel at home, places where I think I could live happily long-term. This means that although I have a huge amount of respect for Rome and think the Amalfi Coast is gorgeous, I won’t list either of those places in response to the “favorite places” question.

Should you ask me for travel advice in Italy, then, don’t be surprised if I tell you to avoid Milan – right after I’ve told you how much I love it there.