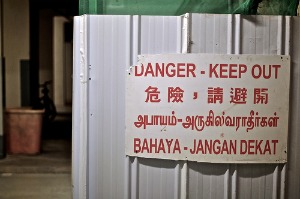 As any traveler these days can tell you, it’s fairly easy to get by on English alone (provided that you’re patient and have a good sense of humor). The English-ization of the world doesn’t mean learning a foreign language isn’t still a good idea, however.

Knowing even a few words in the language of the places you visit helps endear you to the locals – it’s respectful and allows you to stand out from travelers who think just getting increasingly louder is enough to make them understood – but learning another language isn’t just about being nice to people you meet when you travel.

One of the best things I did while in college was study in another country. I can’t even count the number of ways the experience changed me for the better, but learning a new language isn’t on that list. As a language-challenged (and, frankly, lazy) student in high school, I took the easy way out and studied in England for a semester.

This is not to say that studying in England was a piece of cake, of course, as any exchange student will tell you – it’s cultural immersion even if they speak the same language. But there’s a part of me that wishes I’d pushed myself into choosing an independent exchange program beyond the short list of schools my college worked with. Had it been a simpler option (or had I been more motivated), I might have ended up studying abroad in Italy back then, thereby making my current frustrations with the Italian language non-existent. I came home from my term in the UK with an arsenal of English slang, but that doesn’t exactly count in the multi-lingual department.

Being able to speak – however slowly – in another language opens up a different world of cultural insights that someone who only speaks their mother tongue can never quite reach. It’s not easy to retain multiple languages (at least not for most people) – no easier than it is to learn the language in the first place – but it can help you get more out of your travels and especially more out of the interactions you have with other people.