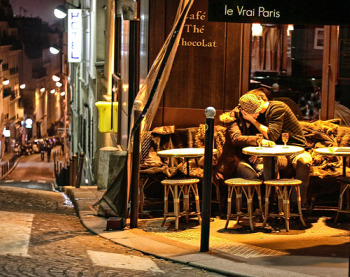 True story. In November, a group of BootsnAll staffers were sitting around a table trying to make a list of holidays coming up for which we needed to line up material for our sites. We jotted down the biggies – Thanksgiving, Christmas, New Years – and then paused. I jumped right ahead to Memorial Day, the 4th of July, and Labor Day, until someone said, “What about Valentine’s Day?”

What about Valentine’s Day, indeed.

You can read my skipping the quintessential holiday of love in a few ways. Either it’s because I’ve been married for many years and it’s really just not a holiday that we celebrate, or it’s because I’m a horrible person. (Come to think of it, I suppose it could be a combination of those two things.) But really, it’s just because Valentine’s Day has never been a holiday I’ve thought about traveling for in the past. After some discussion with my colleagues, however, I now realize the error of that thinking.

Sure, there are some overly sappy qualities to Valentine’s Day – not to mention the Hallmarkification of the day – but that doesn’t mean you can’t sweep your sweetheart off his or her feet with a romantic getaway. Heck, if it’s an excuse to travel, it can’t be a bad thing, right?

To be sure, there are the usual suspects for a romantic trip – places like Paris, Venice, and Hawaii. But those are also traditionally pretty expensive places to visit, meaning budget travelers tend to steer clear (or plan to scrimp). The good news for budget-conscious travelers who still want to impress a lover is that Valentine’s Day falls in a time when prices aren’t as high in any of those three locations as they can get later in the year.

Paris
It’s hard to out-do Paris on the scale of cities that send hearts fluttering. The City of Lights is also the City of Love, and luckily it doesn’t have to cost a fortune. There are cheap tickets to Paris on offer lately, since we’re still in the midst of the winter low/cheap season, but those prices are likely to go up in the not-too-distant future. Many of the sales available now are good through the end of February, however, so you can still wow your sweetie with a Valentine’s Day trip to Paris even if you buy the ticket in January.

And to put even more wow in the whole deal, you can’t go wrong with any of these romantic hotels in Paris. Some of them may be a little more expensive than you might otherwise consider, but if you’ve snared a great deal on airfare you might be able to splurge a little on the hotel part.

Venice
When one of the former residents is Casanova, it’s hard to deny the allure of romantic Venice for Valentine’s Day. Sometimes February can be a zoo in Venice, depending on when Carnevale is that year, but the truth is this is a city that’s crowded year-round. You can see the more romantic and quiet side of Venice, however, by staying in the city for a few days.

Although the center of activity in Venice is St. Mark’s Square, meaning it’s usually where the crowds are at their thickest, it’s also very cool to stay near the famous piazza so that later at night or early in the morning (when all the day-trippers are gone!) you can enjoy it in peace and quiet. Choose one of the hotels in Venice that’s within a short walk of St. Mark’s Square and you can be there in a heartbeat. And did you know you can fly right into Venice and bypass the huge airports in Rome and Milan? What’s more, there’s some cheap airfare to Venice out there right now (cheaper in some cases than flying into Italy’s bigger airports). And if it’s a little chilly in Venice in February, that’s a great excuse to cuddle.

Hawaii
Okay, okay – I get it. “Romantic” doesn’t have to mean “cold places where you’re forced to snuggle.” Sometimes the most loving thing you can do for your snowbound partner is to give them a warm-weather break in the middle of February. Which is why Hawaii is yet another popular place to go for Valentine’s Day.

Hawaii isn’t known as a cheap place to visit, but the period between the winter holidays of Christmas/New Year’s and Spring Break is something of a low season on the islands – meaning deals to Hawaii aren’t as scarce and prices in general are lower than normal. Fares on airline tickets tend to be lowest from West Coast departure points, but even cities further inland or on the other side of the country have some lower-than-average prices on airfare right about now. And although you might want to spend a little more on a romantic room, there are still some cheap hotels in Hawaii that might be worth looking at to keep your Valentine’s Day getaway within budget.

Think Outside the Box!
Now, I’m not saying a trip to Paris, Venice, or Hawaii wouldn’t be just dandy for Valentine’s Day (or any day, for that matter) – but if you’re looking for something a little different, the world is your oyster. It might sound silly to say that wherever you are can be romantic as long as you’ve got your beloved with you, but it’s true. No, really, it is. And you’re more likely to find Valentine’s Day travel deals to places that aren’t traditional Valentine’s Day hotspots, too – they just won’t be called that.

And if a trip isn’t in the cards for you this Valentine’s Day, that doesn’t mean you can’t get something travel-related for your sweetheart. Here are some Valentine’s Day gifts for travelers – the article is meant to be a gift guide for the man in your life, but I think lots of those gift ideas would work well for travel-loving ladies, too.

So – what are your Valentine’s Day travel plans?