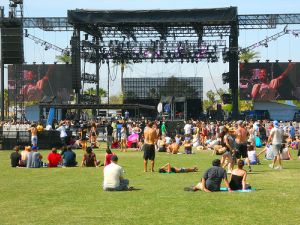 Although you wouldn’t know it by looking outside the window in Portland right now, we’ve had a spate of abso-freaking-fabulous weather here lately. When the sun first starts streaming down on Portland, it’s intoxicating to the point of distraction – and it’s just a taste of things to come.

Summer brings out the festival spirit all over the world, partly because the weather is so awesome everyone just wants to be outside, and partly because so many of the people who go to big music festivals are people for whom summer is their one vacation time per year. We’ve had festivals on the brain lately at the office, so we recently put together a list of some of the best 2010 summer festivals – and we’re sure there are more out there that we missed. In fact, we’re kind of starting to wonder if you couldn’t pack an entire summer with music and arts festivals, going from one to the other without going home until September…

One thing we did notice when we were putting together that list of festivals is what great names they sometimes have. Sure, you have fairly self-explanatory festival names like the Glastonbury Festival, but most of them have some weird-sounding word in the name that just makes you curious to learn more, whether or not you plan to go to the festival. For instance, the name Bonnaroo Festival doesn’t necessarily scream “music festival” to you, does it? And yet that’s exactly what it is – a top-notch music festival in Manchester, Tennessee (making that two excellent music-related reasons to go to Tennessee). And if you heard there was a Sasquatch Festival, would you think it was more about music or hunting for Bigfoot? (Hint: it’s all about music.)

Other entries in the strangely-named festival contest include California’s Coachella Festival, Seattle’s Bumbershoot Festival, and the long-running Lollapalooza Festival. And even though the Burning Man Festival isn’t such an odd name, considering they do actually burn a big statue of a man at the end, I think it’s safe to say that the whole festival itself falls into the “slightly off-kilter” category.

If your summer plans don’t include traveling to one of these festivals, don’t worry – we’re also keeping our holiday travel guide updated so that you can peek at it and see what excuse is coming up whenever you’re in the mood to plan a getaway.