What can change in 14 years? In Prague, quite a bit. 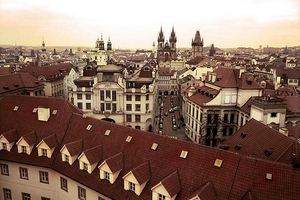 When I was in college and preparing for my semester abroad in England, I remember talking with a friend about a side-trip I was probably going to take with my Swiss cousin to Prague.

“Prague is depressing,” she said. “Pretty, but depressing.”

Turns out, she’d visited the city during a high school summer trip to Europe, back when then-Czechoslovakia was still under Soviet control. My friend told me that the whole city felt cold, the picturesque Charles Bridge was devoid of people, and she just felt like the people weren’t friendly or particularly happy.

By the time I reached Prague in the fall of 1992, it was anything but a depressing city. The Prague I experienced during that first visit was stunningly beautiful, bustling with street vendors selling locally-produced art and trinkets (often made right at their makeshift stands as you watched), and incredibly cheap. From that time until my second visit, I had an impossibly romantic view of Prague – a view no city exposed to the passage of time could ever hope to maintain.

So it was silly of me to be disappointed when I went back in 2006, but I was. Oh, how the times had changed.

In 1992, Prague was being described as the new “Paris of the 1920s” (how many cities have been given that nickname, I wonder?), largely because it was drawing huge numbers of artists and budget travelers after the fall of the Soviet Union. The city was almost shockingly cheap. Sure, there were hostels in Prague back then, but why bother staying in a crowded dorm when you could instead choose any of the cheap hotels in Prague for a fraction of what you’d pay anywhere else in Europe? Or, even better if you were traveling in a group or staying a bit longer, there were loads of furnished apartments for rent all over the place.

My cousin and I had taken the train to Prague from Zurich (my aunt thought it would be nice for me to see more of the countryside from the train window), but on the way back we flew. Honestly, it never would have occurred to me to fly within Europe – especially back then when the super-budget airlines had yet to give the rail system a run for its money – but even then you could find discount airfare to Prague, especially if you were already in Europe.

We ate like royalty, my cousin and I – several-course meals every night for what seemed like pennies. Virtually no one spoke English (thank goodness for my multi-lingual Swiss cousin who not only spoke German, the most common second language, but a bit of the local language as well). There were tourists in Prague in 1992, yes – but the vast majority of them were what appeared to be itinerant backpackers, many of whom populated the Karluv Most (Charles Bridge) at night playing music and asking for handouts.

When I went back in 2006, the city was no less beautiful, and the Jewish quarter I’d found so haunting during my first visit was much more well-organized as a “museum.” More people spoke English, making it easier on those of us who aren’t gifted with an ear for languages. There were even more hostels, and even more hotels, and although the prices on both had gone up they were still much cheaper than in other parts of Europe. And although I still got there by train, there were even more discount flights to Prague available from all parts of Europe as well as beyond.

But Prague had changed. 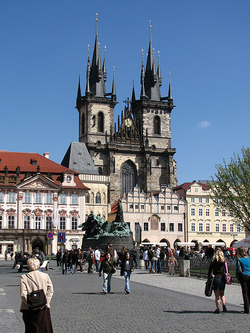 The Old Town Square, which I’d loved to bits in 1992 for its pretty buildings and singularly fantastic church (the one that looks like it should serve as the bad guy’s lair in some Batman movie), was now teeming with people – and tour guide flags. Big bus tours had invaded Prague during the space between my visits, as the city had continued to open up. The city wasn’t even in the same country in 2006 as it had been in 1992 – it was now the capital of the Czech Republic rather than Czechoslovakia.

My husband, who’d never been to Prague before that 2006 trip, has a very different opinion of Prague than I did after my first visit. In addition to remembering how pretty the city is, he remembers how our debit cards didn’t work in a single bank machine anywhere in Prague for reasons that remain a mystery to us (not to mention our banks). He remembers fighting through crowds just to get across the street. He remembers the long lines to get through the Jewish cemetery.

I remember those things, too, and know they were frustrating in the moment. But in my mind, a few years removed from my 2006 trip, Prague has gone back to being that romantic city I first saw in 1992. I know it’ll never be that way again, that some other city has become the new “Paris of the 1920s,” and by my next trip to Prague the prices will probably have risen to such a degree that even that last vestige of its former charms will be a distant memory. But I also know that the city itself will always be one of the most beautiful places I think I’ve ever seen – a place that surprised me because I had absolutely no expectations about it, and a place I feel privileged to have seen at such an interesting point in its history.

And next time I go, I’ll be better prepared to face whatever changes have come to Prague.